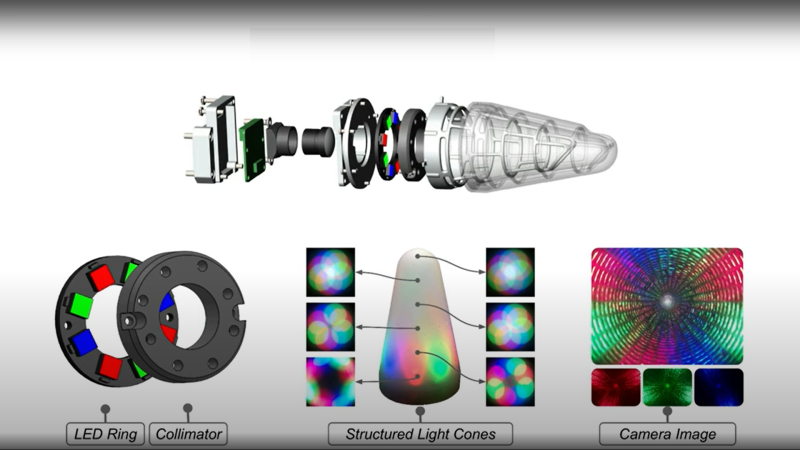 A team from Max Planck Institute for intelligent systems in Germany has developed a new thumb shaped touch sensor, which can analyze the force and direction of the contact on the whole structural surface. The system is suitable for smart operating systems and consists of components that are easy to purchase, so it should be extended to larger components without damaging the system. The first step is to place the soft and supple outer skin on the rigid metal skeleton, and then use structured light technology to illuminate it internally. From there, machine learning can be used to estimate the shear and normal force components in contact with the skin on the entire surface by observing how the internal envelope distorts the structured illumination.

The novelty here is that they combine photometric stereo processing with other structured light technologies, using only one camera. The camera images are directly input into the pre trained machine learning system (unfortunately, the details of this part of the system are a little lacking), which directly outputs the estimated values of contact shape and force distribution. It is reported that the spatial accuracy is good, less than 1 mm, and the force resolution is as low as 30 millinewton. By directly estimating the normal and shear force components, the contact direction can be analyzed as 5 degrees. The system is so sensitive that it is reported that it can detect its posture by observing the skin deformation caused by its own weight!
We haven’t covered so many optical sensing projects yet, but here’s one that uses linear CIS sensors to turn any TV into a touch screen. While we discuss the use of cameras as sensors, here is a simple way to use optical fibers to read multiple shutters through a single camera and OpenCV.