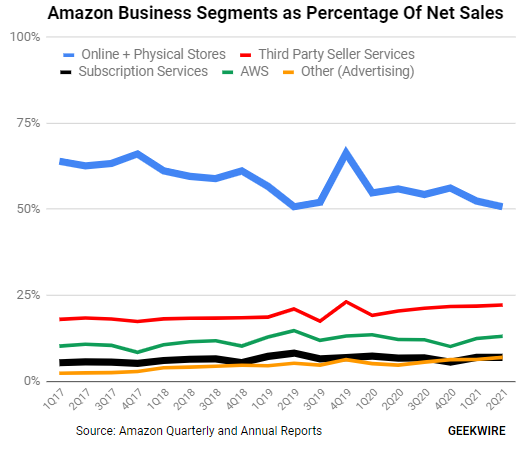 Direct retail sales are expected to be less than half of Amazon’s business for the first time in its history-a fundamental shift that reflects the expansion of the e-commerce giant beyond its roots as an online store.

Revenue from Amazon Web Services, Amazon Prime, third-party seller services, online advertising and other services accounted for 49.3% of Amazon’s business in the second quarter. The total almost matches the company’s revenue from online and brick-and-mortar stores and seems to be expected to surpass them in the future.

This is one of several key points of Amazon’s second-quarter earnings report released on Thursday afternoon. In this episode of Day 2, GeekWire’s podcast about everything about Amazon, we are bored with Amazon’s numbers.

Participating in the discussion are two veterans in the online retail industry who pay close attention to Amazon’s business:

Listen on it, or subscribe for day 2 Apple Podcast, Google Podcast, Spotify Or wherever you listen.