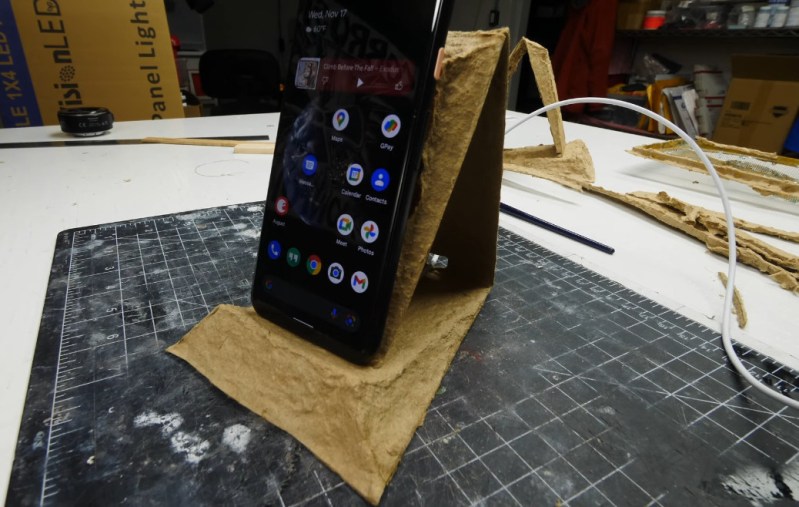 This is the most exciting display since the hakadi award ceremony – [Eric Strebel] used the pulp mold he designed and made in the first three videos. If you missed our report, [Eric] set out to design an environmentally friendly wireless charger that can be used in six months to a year and looks good.
[Eric] first cut up a large amount of cardboard, and then pulped it in a new Oster mixer. To be honest, this mixer looks very heavy. Pulping involves mixing cardboard fragments with water until they reach a consistency like pepper. The mixer lasted 20 minutes before it broke down, so (ERIC) immediately replaced it with ninja, which was more challenging than cardboard.

For actual molding, [Eric] mixed his juicy pepper with about 30 liters of water in a bathtub large enough to hold a long brass mold. He dipped the mold to collect a layer of pulp, then pulled it out, then pressed the wireless charger into place, created a pocket for it in the last dry mold, and then replaced it with an acrylic disc of the same diameter. [Eric] pointed out that in an industrial environment, such parts may dry in ten minutes. Even if he put it on the food dehydrator, it still takes 4-5 hours to dry. Drink soup after rest.
This is not [Eric’s] first wireless charger. A few years ago, he used polyurethane foam to make a rotating version of the prototype, which could draw portraits or landscapes.