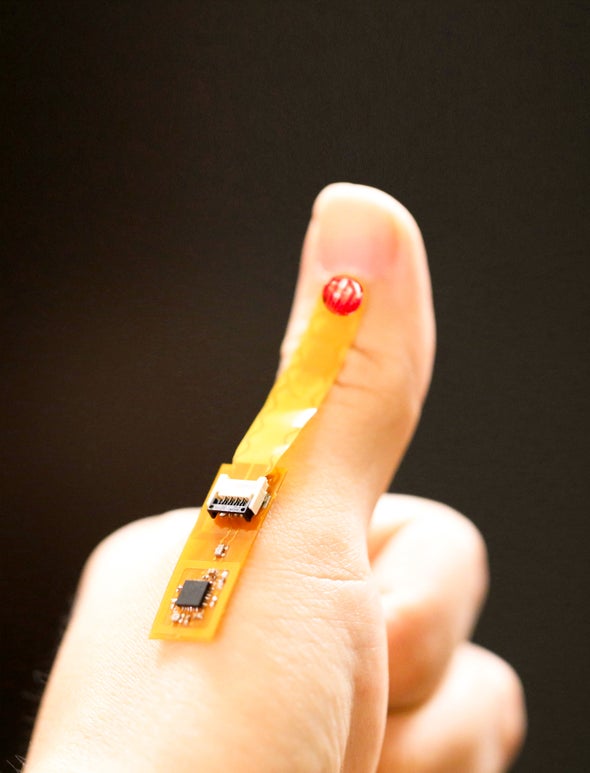 When bacteria enter a wound, they can actually threaten life and limbs unless they are found as soon as possible. A new sensor can be mounted on a bandage to alert nearby smartphones when bacteria enter a dangerous area.
Healthy human skin is covered with bacteria such as Staphylococcus aureus and Escherichia coli, which will soon colonize open wounds. To prevent the spread of bacteria in the body, resulting in permanent injury or death, infected wounds may need to be cleaned and treated with antibiotics, or in the most extreme cases, amputation may be required. Medical staff identify infection by opening the wound and checking for obvious signs, or by wiping the wound and conducting laboratory tests. But removing the dressing will slow the healing process. In addition, observation is subjective, swab testing takes time, and both options require the patient’s personal presence.
To solve these problems, some research groups are developing a device that can sit under a bandage and continuously monitor indirect signs of infection, such as changes in wound temperature or acidity. Scientists at the National University of Singapore have now created a more direct infection sensor.
The sensor can detect an enzyme called deoxyribonuclease (DNase). It is a reliable indicator of infection, because pathogenic bacteria produce this enzyme in large quantities, while bacteria on healthy skin do not produce this enzyme, so its detection reduces the possibility of false positive results. In addition, DNases are formed before other signs of infection appear. A paper published in progress of science on Friday described the new alarm system called “wireless wound infection detection” sensor.
The enzyme sensing part of WINDOW is made from a viscous material called DNA hydrogel (DNAgel), which is made up of DNA’s entanglement chain. The researchers developed a special DNA gel that remained stable in the water environment, such as human body, but began to decompose in the presence of DNA enzyme. They connect the material to a chip that can sense when the gel will rot and react to send it to the mobile phone. The signal is broadcast through a battery free wireless technology called near field communication (NFC), which allows people to pay with the touch of a credit card.
“By combining this dnagel with a sensor (chip), we can make a completely battery free device that can be installed on a bandage on a wound,” said study co-author John Ho, an electrical engineer at the National University of Singapore. A person with a chronic wound, or a person sent home after surgery, may monitor his status by tapping the smartphone next to the dressing several times a day. If the mobile phone receives an infection alarm, it can send a message to the doctor or tell the patient to return to the hospital for antibiotic treatment.
Other researchers have also tried different infection detection methods, including monitoring bacterial transmission with high-tech imaging technology and sniffing out chemical signals of infection with an “electronic nose”. “Theoretically, people have proved this,” said Messer Chalmers, a project manager at the University of bath in June. Instead of participating in the new research, he is committed to developing a low-cost ultra fast swab infection test team. She said that the question ultimately lies in the utility of the tool: whether it requires a lot of heavy equipment, whether there are huge obstacles to legal approval, and how cost-effective it is. She pointed out that the window sensor needs electronic components and smart phone access, which may make it inaccessible to people outside some expensive hospitals. He said that the material cost of each window sensor is less than $10, and pointed out that it can be manufactured by existing electronic manufacturing methods.
So far, Ho’s team has exposed DNA gel to the wound swabs of 18 patients with diabetic foot ulcers, some of whom are infected with Staphylococcus aureus to observe the degree of degradation of DNA gel in the presence of bacteria. The researchers also used the device on six live laboratory mice whose wounds were exposed to the same bacteria. The device successfully detected the infection within 24 hours before any physical signs appeared. As the window sensor is still in its early stage, Ho plans to continue testing on a larger patient population and wounds infected with other types of bacteria. “It is assumed that this also applies to many other types of strains [because they] have similar DNase secretion mechanisms,” he said.