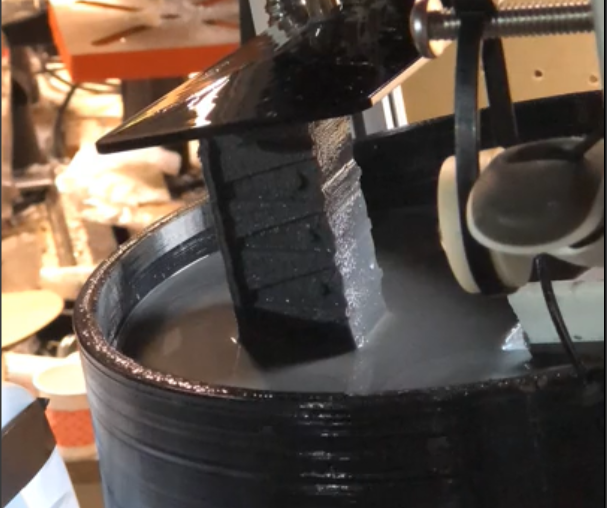 The commonly used resin 3D printer that you may be familiar with is a very simple machine. The machine has only one axis, which is a vertically moving construction platform. Before exposing the next layer, light exposes the photosensitive resin, which cures on the transparent window, and then pulls it out from the transparent window.

CLIP is a continuous resin printing process that speeds up printing by removing this peeling process. It utilizes a bottom membrane that is permeable to oxygen. This small amount of oxygen at the border prevents the cured resin from sticking to the bottom, so that the Z axis moves upward continuously, which significantly speeds up printing.

method [Eric] A bath based on continuous rotation is used to keep the resin moving and replenish the resin in the active polymerization zone.The bottom of the bathtub is made of rigid material Polydimethylsiloxane The surface is constantly wiped with a scraper to supplement the oxygen layer. He pointed out that Carbon still has problems in getting enough oxygen into the build layer, which he believes is why they only show prints of smaller or lattice structures. His method should be able to solve this problem. The construction platform moves upward slowly, and the part appears in a long continuous movement. He reported a printing speed of 280 mm/hour, which is quite fast to say the least. More details are scarce, and the embedded video is a bit unclear, but as one commentator said: “I think we have just seen the development of resin printing!” The next sharp comment changes “evolution” to “rotation”, This makes us giggle.

Now, we all know that 3D printing is not new, only patent expiration and timely work [Adrian Bowyer] And the reprap team started the explosive growth of current FDM printers. Resin printers may be hindered by the same problems until something completely new starts to develop next time. Maybe this is evolution?We really hope [Eric] Decided to use some details to write his project, we will wait and study all the bloody details carefully. Fingers crossed!