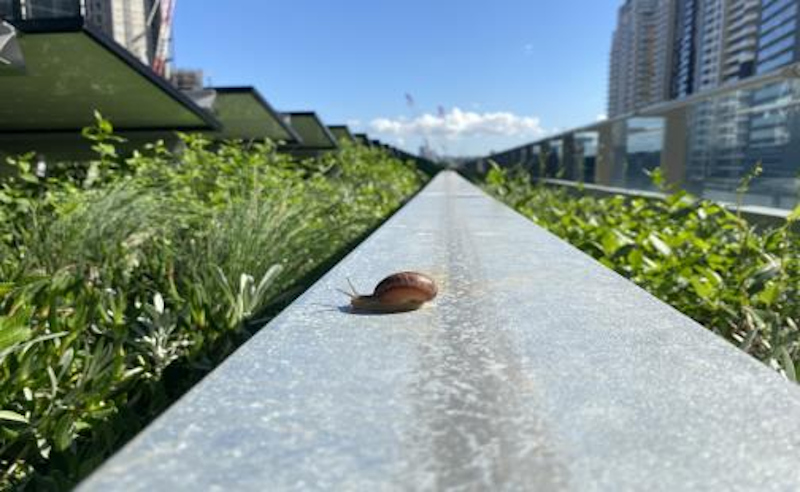 Over the past few decades, the architectural community has launched a campaign to help connect the development of large cities with plant life and greening. We have seen some buildings, hundreds of rendered, towering skyscrapers and large buildings covered with vegetation.

Beauty is usually beautiful, but the idea is for its tangible benefits and pure visual glory. Naturally, plants convert carbon dioxide into delicious and life-giving oxygen, which is an obvious promotion. However, according to a recent study in Sydney, Australia, green plants on the roof of buildings also help to increase the output of solar devices.
The solar energy device on the top of daramu house in Sydney has green plants on the roof. Source: UTS Report

The study was led by Dr. Peter IRGA of Sydney University of technology and published a report for the city of Sydney. The opportunity for this study came suddenly, thanks to two parallel similar office buildings in Central Sydney.

Photovoltaic solar systems are installed on the roof of each building to generate electricity. A large number of plants are placed around the roof and solar panels of one building, while the other building is bare.

In eight months, during the experiment, the roof with green plants was 3.6% more efficient than the light roof. At peak generation time, the difference between the two is as high as 20%. This resulted in a net power of 69 MWh for green roofs and 59.5mwh for bare roofs. The additional 9.5 megawatt hours generated during the experiment is worth a full US $2595 at the local market price.

The key to the performance difference is the temperature. Solar panels don’t work well at higher temperatures. IRGA points out that “the efficiency of photovoltaic panels will be reduced if the temperature exceeds 25 degrees.” this may be a problem in places like Australia, where there is plenty of sunshine in summer, but the daily temperature is usually between 30 and 45 degrees Celsius. 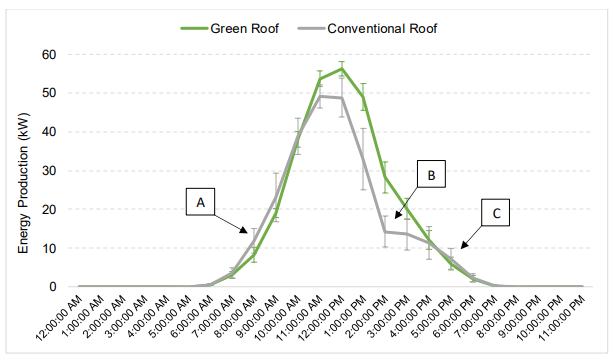 Green roofs cool buildings through a process called evaporation and transpiration, or more accurately, the dual process of evaporation and transpiration. Water from soil and other roof surfaces is evaporated, reducing heat in the air. In addition, the pores on green roof plants, called pores, are essentially pores for plants to exchange gas with their surrounding environment. Through these pores, plants lose water to the atmosphere, further aggravating the cooling process. Ideally, the vast majority of this water comes from rainfall, avoiding irrigation costs, which may undermine the overall efficiency and environmental benefits of the roof.

It is reported that the temperature of the green roof is about 20 ° C lower than that of the same bare roof office building. This is a remarkable figure, which also shows the quality of green roof design in the experiment. This can be attributed to the careful selection of appropriate plant species, which can survive and thrive on the roof and provide good cooling performance.

Therefore, this significant temperature drop keeps the solar panel in a more effective working range, thereby increasing the efficiency by 3.6%. This figure is determined under simulated lighting conditions to eliminate the difference in the urban environment around the two buildings so as not to damage the results. That may not sound like much, but every year a lot of money is spent on improving the efficiency of solar panels by one percentage point. In contrast, providing a cheap natural cooling solution can have a very huge effect.

Roof solar installations and green roofs must be carefully designed to deal with the shading of surrounding buildings. This may affect power generation and require the use of appropriate plant species to obtain sufficient sunlight.

Green roofs also provide other benefits. The research report said that during the whole experiment, the roof absorbed nearly 9 tons of greenhouse gases and significantly reduced the outflow of rainwater. These plants are also popular with local wildlife. The team noticed that insects and birds soon flocked to the green trees. Even carnivores appear at the top of the building, which is surprising to see from a tower in Sydney’s central business district.

In general, this is a project that shows a lot of net benefits. In addition, it does not have to be limited to green roofs. Other solar devices may benefit from green plants in the same place, which can naturally cool the surrounding environment and bring better solar panel performance. We look forward to more research in this field, especially in the way of localization. Green roofs and similar technologies are highly dependent on local climate conditions and usually need to be designed to match local animals and plants. For those who devote themselves to it, it seems to have a great harvest!