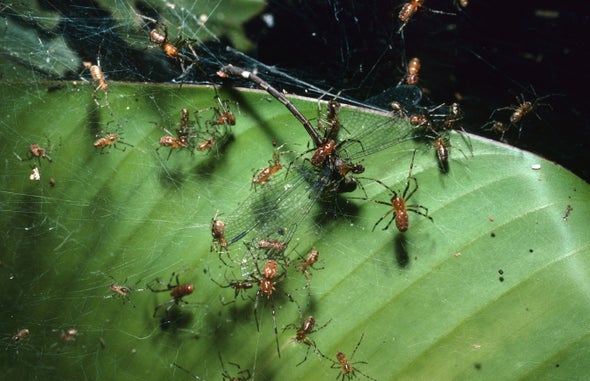 Hunting spiders exist outside your nightmares. Although most spiders prefer to live alone, 20 of the approximately 50000 known species live in groups. One is called the tailless spider (Anelosimus Eximius), which lives in a large population of up to 1000 spiders. These spiders work together to form a spider web several meters wide. When prey falls into a spider’s web, these social spiders coordinate and attack prey together, which allows them to capture larger prey than hunting alone. Until now, how these spiders carry out this coordinated attack is still a mystery.
The study found that it has been proved that spiders use the vibration in giant spider webs to arrange a synchronous clustering process.
“Miraculously, there is no leadership between these spiders,” said Raphael Jeanson, a researcher at the center for animal cognitive research (CrCa) at the University of Toulouse in France and senior author of the new study of social spiders More specifically, the entire spider community will coordinate the attack when each individual receives the same information.
When attacking in groups, spiders descend to prey by synchronizing two stages of movement: approaching struggling prey and stationary. In this way, spiders can adjust their approach time so that all spiders attack at the same time.
Through field observation and computer simulation of this coordinated attack, Jeanson’s team learned that the attack was almost entirely caused by vibration in the shared network.
“When prey falls into a spider’s web, it triggers the spider’s movement,” Jason told LiveScience. “But after a while, they all stopped for a few milliseconds and then began to move again.”
By luring spiders with dead flies stuck to the end of the vibration generator, the researchers showed that hunting was actually triggered by the struggle of helpless prey. However, this does not explain the coordinated movement of the colonies.
To do this, scientists need a computer model. The model shows that although the vibration of the prey may trigger the initial movement, it is the vibration of the spider population that enables the predator to coordinate the attack. When each spider senses the vibration of its prey, they begin to walk. But the footsteps of hundreds of spiders gathered on a struggling insect also vibrated through the fibers of the cobweb and blurred the sound of trapped food.
“It’s a bit like talking to someone in a room,” Jason said. For a spider, it makes noise at every step. Then they must stop moving so that they can hear their prey to ensure that they are still moving in the right direction.
The quieter the struggling prey, the more difficult it is for spiders to coordinate their stop and go movements. When the researchers shook the cobweb and then removed the bait, the swarm responded by moving towards the prey, but then each spider had to stop moving to “listen” for signs of peristalsis. Scientists have found that if the prey vibrates more strongly, the swarm doesn’t need to be so quiet, so their synchronization is lower

This study was published March 7 in the journal Proceedings of the National Academy of Sciences.