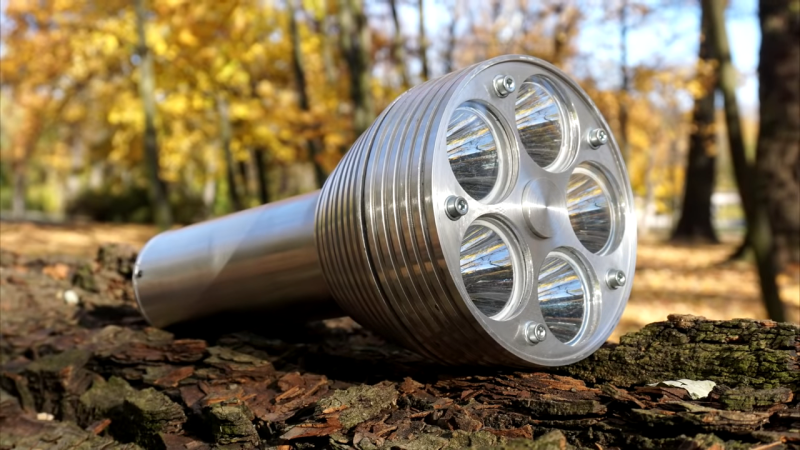 If you are a person who likes to use a flashlight, you know you can hardly get the brightest, most powerful and most ridiculous flashlight. You may even decide to create a ridiculously powerful flashlight for yourself, just as [Maciej Nowak] did.
If you choose the DIY route, please note that this may not be a simple process, at least if you follow the leadership of [Maciej]. His flashlight is made of aluminum wheels, all of which rotate down on the lathe to form the head of the flashlight. The lamp cap consists of three parts, each of which acts as a radiator for five 20 Watt Cree xhp70 LED modules. The LED is installed considering thermal factors and connected in series to a DC-DC converter, which uses a battery pack made of four 21700 lithium-ion batteries to provide the necessary 30 V voltage. The electronics also include a BMS for charging the battery and a MOSFET switch module, forming a neat package that can be mounted on an aluminum handle.

The following video shows that the flashlight is very bright, the field of vision is uniform, and there are no hot spots. Considering the service life of 45 minutes and the charging time of 3 hours, it may be good to let one to five LEDs anywhere light up at the same time. Turning on the LEDs in sequence may also produce some interesting effects.
Given the propensity of our community, it’s not surprising that this is not the first powerful flashlight we’ve ever seen. This one breaks the 100 watt barrier with a cob led, and the output light of this ammunition tank is higher. However, neither of these phones looks like a traditional flashlight, which is the advantage of [Maciej] products.