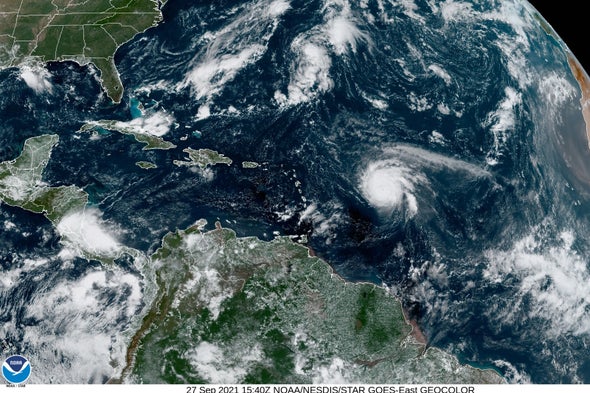 Hurricane Sam expanded into a large vortex in just a few days and swept the Atlantic in the form of a category 4 storm.
As of Thursday night, Sam was still a tropical storm. By Saturday morning, Sam strengthened into a category 3 hurricane, and then continued to strengthen. According to the National Hurricane Center, it is expected to be a major hurricane in at least the next day or two.
Meteorologists do not expect hurricane Sam to make landfall in the United States, although it may affect parts of the Caribbean. The storm is expected to bend north and return to the sea later this week.
Although scientists hope that hurricane Sam will not cause major damage before crossing the ocean, it is still a symbol of the seasonal change of Atlantic hurricanes – a huge and rapidly intensifying cyclone in another unusually busy hurricane season.
The Atlantic hurricane season is currently at its peak and shows no signs of slowing down. Sam is the fourth named storm formed in a week and the 18th named storm of the season. (named storms include tropical storms and hurricanes.)
Sam is also the seventh hurricane of the season and the fourth hurricane to reach the “big storm” state, that is, a category 3 or higher hurricane.
Shortly after Sam’s formation, subtropical storm Teresa became the 19th named storm of the season. The brief Teresa dissipated on Saturday after holding on for a few days.
According to Phil klotzbach, a meteorologist at Colorado State University, there is only one season in observed history with 18 or more storms at this time of year. It was 2020, the most active hurricane season on record, and by the end of the season in November, there were 30 named storms.

It is unclear whether the same standard will be met in 2021. But it has exceeded early predictions for the season.
NOAA and Colorado State University independently issue hurricane season forecasts every year, usually updated in the middle of the season. The latest season outlook updated by the National Oceanic and Atmospheric Administration (NOAA) in August predicts that there will be 15 to 21 named storms by the end of the season, including 7 to 10 hurricanes and 3 to 5 major hurricanes.
Similarly, CSU’s outlook predicts that by the end of the hurricane season at the end of November, there will be 18 named storms, including 8 hurricanes and 4 major hurricanes.

Most of these milestones have been reached this season.
Klotzbach told E &amp; amp; E news, like last year, many meteorological conditions have formed an unusually active season this year. This year’s ocean temperature is higher than in previous years, contributing to the formation of storms. Wind conditions are also favorable for hurricanes.
This year, there has also been a strong west African monsoon, which is a large general circulation model, which is often active in summer. Klozbach pointed out that the West African monsoon helps to generate waves in the atmosphere, which can be used as the “seed” of hurricanes in the ocean.
“Most of the storms that have formed since early August have developed from systems originally formed in Africa,” he wrote in an email.
Last year, warm ocean temperatures and favorable wind conditions also contributed to the peak season (climate magazine, August 21, 2020).
Climate change and cleaner air
With a record breaking season in the rearview mirror and another strong season underway, it is worth asking: will climate change produce more hurricanes?
It turns out that the total number of storms may seem like a diversion.
Climate change affects hurricanes in many ways. Perhaps most notably, it makes them more nervous. This means that any storm is more and more likely to evolve into a major hurricane.
Recent studies have found that hurricanes become stronger and stronger over time. The model predicts that hurricanes will continue to occur as the Earth continues to warm.
However, models usually do not predict the change in the total number of storms formed in each season. The storms that do form may be stronger, but in general, there may not be more.
This is because climate change affects the climate in complex ways. On the one hand, rising ocean temperatures do help hurricanes form more easily. On the other hand, climate change may also change the atmosphere and wind by inhibiting the formation of hurricanes.
Because these two opposing forces are at work, the total number of storms may remain unchanged. In some parts of the world, the model shows that it may even decline slightly.
In other words, there is evidence that hurricane activity may have occurred in the Atlantic over the past few decades.
NOAA recently updated its baseline to define the “average” or normal hurricane season. The agency usually uses a 30-year average, which is updated every 10 years. From 1981 to 2010, the previous baseline, there were 12 named storms in the average hurricane season, including 6 hurricanes and 3 major hurricanes.
The new baseline for the period from 1991 to 2020, just updated this year, has an average of 14 named storms, including 7 hurricanes and 3 major hurricanes.
Scientists believe that another human impact unrelated to climate change may be part of the story. In the past few decades, the reduction of air pollution may contribute to the warming of the Atlantic.
Some types of air pollution have a cooling effect on the climate, which was very serious for most of the 20th century. Scientists believe that pollution and its associated cooling effects may have suppressed hurricane activity in the first half of the 20th century.
However, since the 1970s, Europe and the United States began to take serious measures to reduce pollution levels. The clean air act is a key contributor to these efforts. As a result, pollution levels fell and the Atlantic began to warm at a faster rate.
Scientists believe that hurricane activity has intensified again.