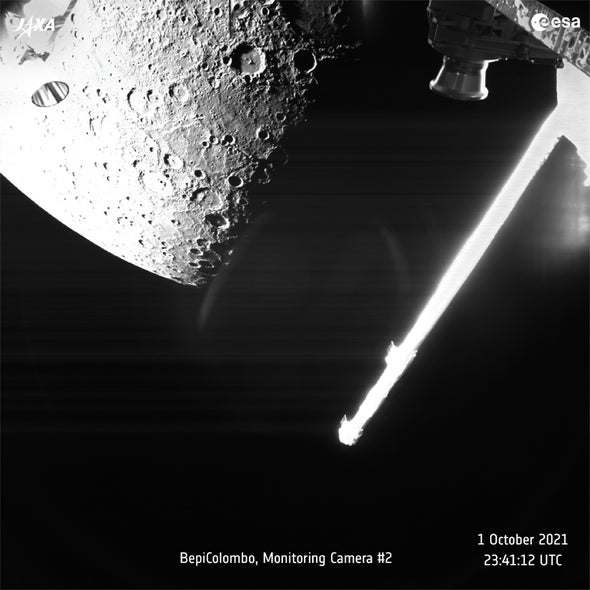 The bepicolombo mission from Europe and Japan flew over mercury for the first time, only 199 kilometers over the surface of mercury at 23:34 UTC on October 1.
It took black-and-white photos of Mercury’s cratered surface from a distance of about 1000 kilometers; Bepiccolombo flies around the night side of mercury, so it can’t take pictures closest to mercury. These photos were taken by the auxiliary camera at a relatively low resolution because the mission’s main camera was hidden during Star Trek.
The 4.1-ton, 1.6 billion euro ($1.85 billion) spacecraft was launched in October 2018 and will enter a permanent orbit around Mercury in 2025. It carries two probes, one built by the European Space Agency (ESA) and the other by the Japan Aerospace Exploration Agency (JAXA). The ESA probe will map Mercury’s surface and gravity field to study its internal structure. The JAXA probe will study Mercury’s magnetic field and its interaction with the solar wind. Bepicolombo has flown once on earth and twice on Venus, the first of its six flights on mercury. “The passing of mercury is special because Mercury is the target planet of our scientific research,” said project scientist Johannes benkhoff, a planetary physicist at the European Space Agency in nordvik, the Netherlands.
Overflight is a “gravity assisted” maneuver that allows interplanetary spacecraft to gain or lose momentum and change its orbit around the sun without consuming a lot of fuel. Bepicolombo uses them to brake and make it fall into the solar system. In this way, the spacecraft will eventually synchronize with the orbit of the innermost planet Mercury and enter orbit. Benkhoff said that some of the instruments in the two detectors, especially the on-board magnetometer, collected data during the overflight. This allows the team to begin to achieve its first scientific achievement.
Once in orbit, one of the spacecraft’s main concerns will be the permanent shielding of Mercury’s polar regions from water ice deposits in the crater. On a planet with a daytime surface temperature of more than 400 ° C, this ice was found by NASA’s messenger mission, which studied mercury from 2011 to 2015. It is the only mission to orbit the planet so far.
“I’m so excited to see mercury close again, even for this short flight,” said Nancy Chabot, a planetary scientist at the Johns Hopkins University Applied Physics Laboratory in laurel, Maryland. Charlotte was the chief scientist of the messenger. “I really want to see this planet,” she said.