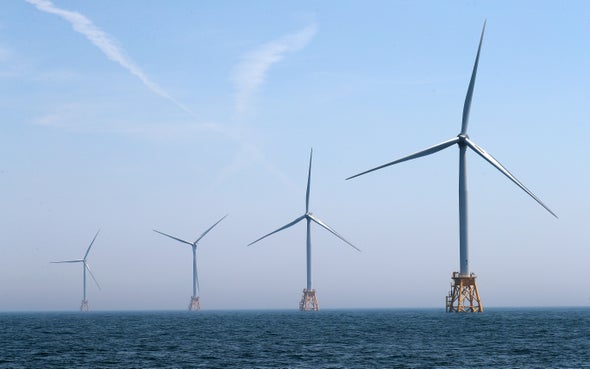 The Nature Conservancy has released a new mapping tool designed to show the potential impact of thousands of offshore wind turbines on whales and other marine life on the east coast.
The tool is the first of its kind in the coastal area between Maine and North Carolina. Its purpose is to support the use of offshore wind power while “protecting where fish and whales gather”
The Nature Conservation Association has more than 1 million members, including 400 staff and scientists. Officials of the association acknowledged at a virtual press conference that there is still a “gap” in understanding how wind turbines change fish behavior.
According to Chris McGuire, head of the organization’s marine project in Massachusetts, another unknown question is how future ocean changes, including sea warming, will affect fish behavior.
“In addition, a project is seeking funding today to try to make progress in climate prediction,” he explained in an interview. But he added that it would take years to fill the gap. Scientists from the conservation society are working with experts from Rutgers University to study this problem.
McGuire pointed out that at present, it takes up to 10 years for the state and federal governments to approve offshore wind power leasing areas. The mapping tool will provide computer data of fish species gathering places at different times of the year.
At the same time, President Biden plans to develop 30 gigawatts of offshore wind power capacity by 2030. This is equivalent to about 2000 turbines on the east coast.
Tensions are already high in Massachusetts, and commercial fishing groups have criticized vineyard winds as a threat to their business.
Although the Conservation Association supports offshore renewable energy, it hopes that both sides can use these maps to resolve the conflict between wind energy developers and fisheries.
Some fish are attracted by boulders that help fix the turbine to the seabed. When turbines are installed nearby, others will obviously move to different habitats, McGuire said.
“We know very little about how to make turbines a better habitat for fish,” McGuire said, noting that a recent study was carried out in the Netherlands to explore this issue.

Some commercial fishing companies have their best fishery maps, but keep them confidential. McGuire said that because these maps are small, they may not provide much information for collecting public information throughout the region.
In addition, the habits of different species may change every year or remain unchanged for more than 40 years, depending on geographical location. Marta Ribera, a scientist working for the nature conservation society, points out that people know more about some areas of the moon than about which fish prefer a particular location.