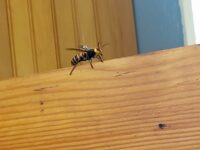 Learn about the latest technology and entrepreneurial news from the past week. Here are the most popular stories on GeekWire during the week of September 5, 2021.

Sign up to receive these updates in your inbox every Sunday by subscribing to our GeekWire Weekly email newsletter.

The most popular stories on GeekWire

The Washington State Department of Agriculture said on Friday that it has found a new Asian giant hornet nest a few weeks after clearing a large number of invasive species from a tree east of Blaine, Washington State-the second in 2021. . …… read more

When COVID-19 triggered a global crisis that threatened the bankruptcy of his startup, Keenan O’Leary changed his plan to help solve another emergency: widespread homelessness . … read more

Scientists at the University of Washington will use $16 million in new funding to help decode how changes in DNA affect health and disease. … read more

The company announced this week that CaaMTech, a startup in the Seattle area that develops new psychedelics, has raised $22 million in funding. … read more

Yoky Matsuoka is known for her pioneering work in neurorobotics, where she assists humans by connecting the central nervous system to the central processing unit. … read more