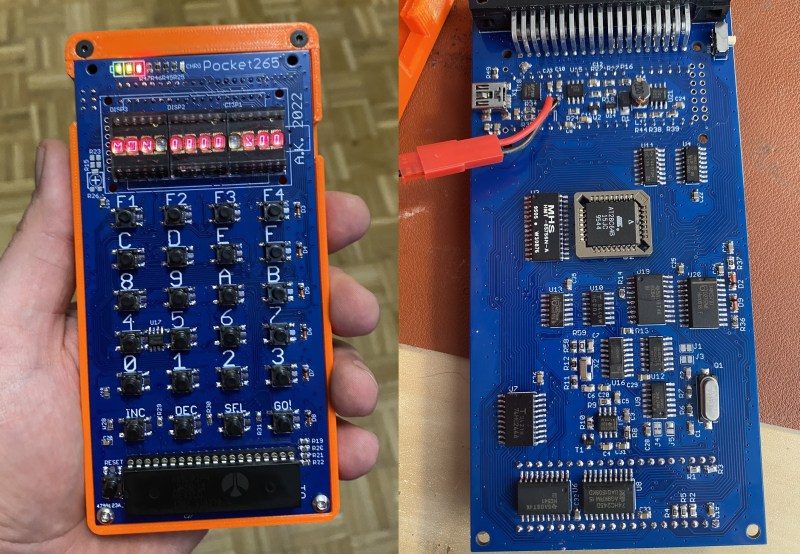 Since microprocessors became cheap in the 1970s, single board computers have existed and never disappeared. Today we have raspberry PIs and lattepandas, while in the 1970s and 1980s, there were Ferguson big board, KIM-1 and a series of Intel SDK boards. Although it is similar in function to modern CPU, ram, ROM and some basic peripherals, compared with today’s small platforms, the old motherboard is huge and usually requires a fairly strong power supply to run.
But not necessarily, as (Alexander) showed with pocket265: a handheld 6502 single board computer, a bit like the famous KIM-1. Like that classic machine, it has a hexadecimal keyboard, which can use machine code to input programs, and a row of LED display screens to display program output. Unlike Kim, the pocket 265 is small enough to be held in one hand and uses a bubble led display, which makes it look more like a programmable calculator in the 1970s. It is equipped with a lithium battery to make it truly portable, and a smooth 3D printing case to make it more comfortable than bare circuit boards.
A single ROM chip contains a monitor program that runs a basic user interface. It also makes programming less complicated by implementing many system calls to handle user input and display output. Serial EEPROM supports local data storage, while UART with USB interface supports data transmission to other computers. If you are interested in building and programming such a machine yourself, [Aleksander] provides code examples and complete hardware documentation on his GitHub page.
The 6502 is still a favorite of hardware hackers: some of our recent projects using this CPU include a beautifully made machine, an easy to build single board computer and a huge bread board based device. Looking for a smaller one? Try this neat small circuit board, or this 6502 is coupled with FPGA.