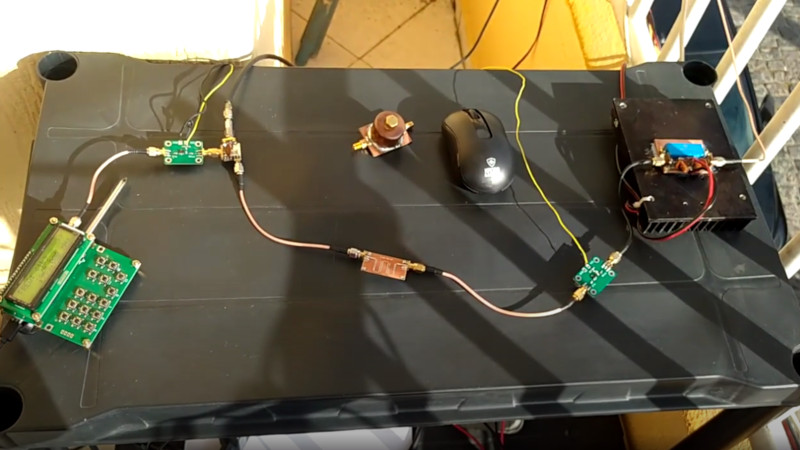 Those readers who are not interested in the world of amateur radio may have missed it for the first time, because in the past year or two, amateurs have owned their own geostationary satellite transponders. Known as Es’hail-2 / AMSAT Phase 4-A /Qatar-OSCAR 100, it is located in a geostationary orbit at 25.9° east longitude and has a transponder with 2.4 GHz uplink and 10.489 GHz downlink . It is possible to receive the downlink using an LNB specially designed for satellite TV, but for many amateurs, the uplink is problematic.come behind [PY1SAN] From Brazil A practical and simple solution Use a mixture of weird shelf modules and some hand-soldered parts.

The upconverter follows a sufficiently simple principle that the radio signal is generated at a lower frequency (in this case by a 435 MHz transmitter) and mixed with the signal from the local oscillator. The filter then picks out the mixer product—the sum of the two—and amplifies it for transmission. [PY1SAN]The upconverter receives the output from the transmitter and feeds it to the MiniCircuits mixer module through the attenuator, which obtains its local oscillator through the amplifier from the signal generator module. The mixer output passes through the PCB stripline filter, through another amplifier module to the power amplifier brick, and then through the coaxial feeder to the dish-mounted helical antenna.

The whole thing is a series of modules connected by short SMA cables, and may come mainly from a single AliExpress order without much spending. Broadcasting via Es’hail-2 is no easy task, but at least for now it does not need to be very expensive. It is even possible to make antennas without breaking the bank.

We introduced Es’hail-2 when it first appeared. I hope it will provide radio enthusiasts with the opportunity to use self-made microwave equipment to operate on a global scale for a long time!