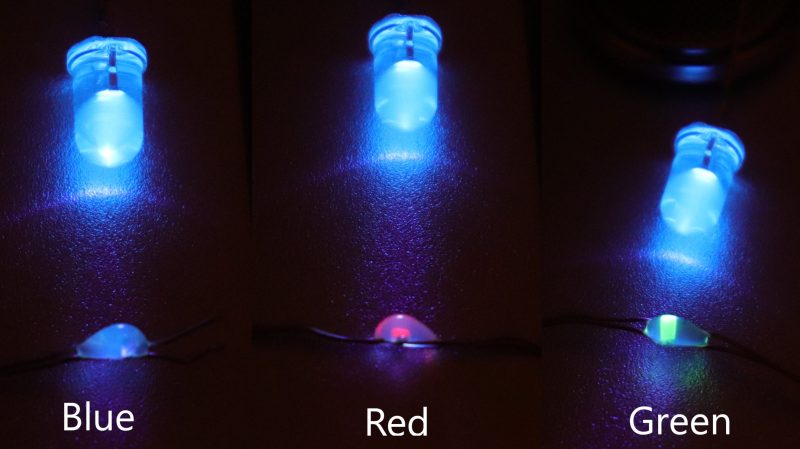 Recently, he found himself repairing a series of cheap LEDs. These devices can be controlled by a string of LEDs, but only four colors can be controlled by the IC. However, an in-depth study of LED itself found a strange discovery.
The LEDs are set in parallel / antiparallel mode. The length of the two power lines is equivalent to one line, and all LED lights are installed between them. If polarity is applied in one direction, the red and yellow LEDs will illuminate, while in the other direction, the blue and green LEDs will illuminate at the same time.
This poses a problem for [Tim], because usually, different LEDs are lit at different forward voltages, which may lead to problems when LEDs of different colors operate at the same time. Instead, he found that all LEDs are basically blue LEDs. However, red, yellow and green LEDs are coated with phosphor. In these devices, when the blue LED below is lit, the phosphor converts the light to the desired color. [Tim] can confirm this behavior by manually illuminating the phosphor using an external UV-A led.
This is an interesting choice, but it must be a way to make multicolor led strings. If you want to become more like it, consider studying this tutorial working with addressable led strings!