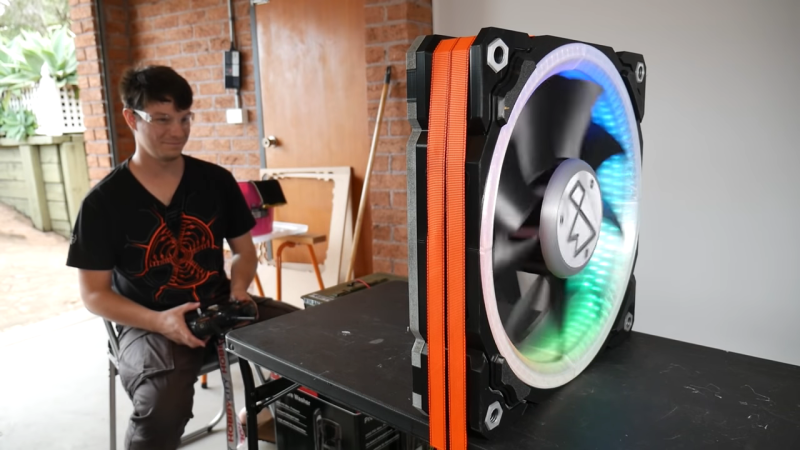 It’s time for us to review the project carefully. After all, no one likes to be deceived by jokes early on April Fool’s day. However, although this huge computer fan looks silly, it does seem to be a legal version, if a little meaningless.
Again, maybe the word “meaningless” is too harsh. This 500mm fan was designed by [Angus] at maker’s muse. It represents a lot of design work to make it buildable, operable and (mostly) safe. Use CNC to cut MDF and printed matter. The fan is a replica of the fan of the ordinary size chassis. The frame of the fan must be printed into four parts and locked together with ingenious interlocking joints. Each of the nine blades is fixed to a central hub with a strong dovetail.

Ruggedness is important because the fan is powered by a 1500 Watt brushless DC motor. Due to the printing gear transmission system, the fan rotates at about 3300 rpm, resulting in terrible noise. There was an obvious “speed jitter”, but (Angus) successfully passed the test. However, the fan did not – the 3D printing gear self destructed after full speed testing, but before the fan was subjected to the best wind tunnel simulation. RGB LEDs look great.
It reminds us of what we might see Ivan Miranda come up with. In fact, his super large 3D printer may be the tool to shorten the printing time.