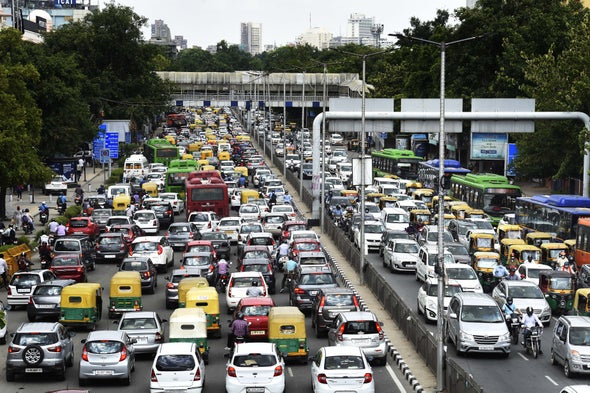 In a report released yesterday, the U.S. Energy Information Administration warned that unless world leaders enact legal and regulatory reforms, emissions from the global transportation industry are expected to increase by 2050.
The report points out that under current policies, the United States and the rest of the world will not be able to achieve the global emission reduction targets that scientists believe are necessary to curb the worst effects of climate change.
Transportation is the largest contributor to greenhouse gas emissions in the United States, accounting for about a quarter of global emissions.
The report predicts that by the middle of this century, electric vehicles will account for a considerable proportion of sales in China, Europe and other regions, but about 80% of electric vehicles account for only about 30% of vehicles on the road, which is far from the necessity of avoiding catastrophic global warming as claimed by scientists and the agency itself.
Electric vehicles currently account for 5% of global car sales. In a report this summer, the International Energy Agency said that by 2030, this figure will need to increase to 60%, while the sales of traditional gasoline and diesel powered vehicles will need to end by 2035 (Climatewire, May 18).
The report found that the expected increase in traffic emissions is mainly due to the expected population growth and increased energy consumption in Africa and parts of Asia.
The report divides countries according to whether they are members of the organization for economic cooperation and development (OECD). Michael Dwyer, an EIA analyst, said that the population growth rate of non OECD countries was three times that of member countries.
“So the population is really pushing up the number of people who want to travel,” he said.
In addition, he said that with the increase of income, many of these people are moving from public transport such as trains and buses to privately owned vehicles and aircraft.
“Therefore, more people need to travel and more people choose less efficient ways to travel,” Dwyer said.
According to independent EIA data, electric vehicles in the United States are expected to account for 12% of the fleet by 2050. This figure was calculated in September 2020, when President Biden raised emission standards and States restored the authorization of zero emission vehicles.

Nevertheless, 12% is far below Biden’s goal of decarbonizing the transportation sector in the middle of this century. Dwyer also pointed out that generally speaking, the vehicle supervision pattern has not changed much since September 2020.
“In terms of American light vehicles, the difference is small,” he said. “The policy is roughly the same.”
Dwyer said another concern is that the increase in electric vehicles may also mean that manufacturers will shift their attention from improving the fuel economy of gasoline vehicles.
The EIA report found that even with the surge in the number of electric vehicles, fossil fuel production will continue to grow. Considering the increase of intermittent power generation such as wind and solar energy, this helps to meet the load and support grid reliability to a great extent. Renewable energy is expected to be the main source of new power generation.
In fact, without major intervention, energy consumption is expected to double by 2050. Although rapid population growth in some parts of the world is driving the growth of energy consumption, other factors are expected to play a role. For example, energy flattening related to the new crown virus in the United States, Canada and Europe is not expected to continue.
“There is a tug of war between efficiency and travel demand,” Dwyer said. “Therefore, some countries have stricter fuel economy standards, especially in Europe, but with the passage of time, travel demand began to win this tug of war.”