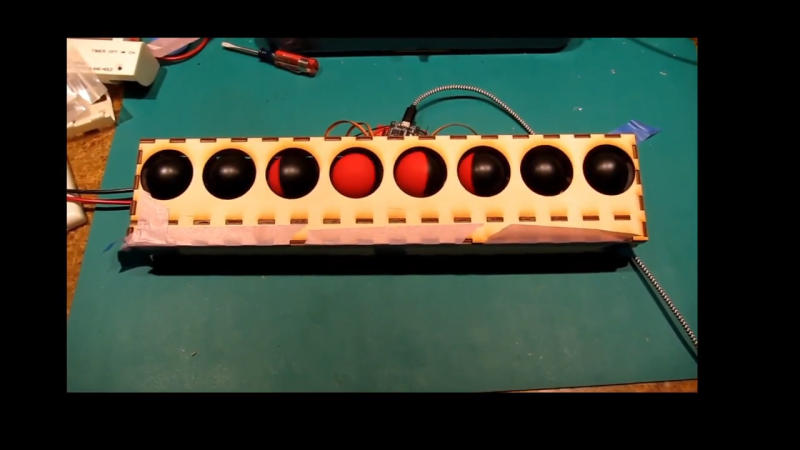 To sum up, it is easy to make an led a continuously lit strip and make it bounce back and forth. Turning this simple animation into a real Larsen scanner with smooth transitions and controlled fading is quite another matter. Completely forgetting the LEDs, making a servo operated Larson scanner is – well, let’s call it an interesting lesson in hardware abstraction.
Larsen scanner is named after the famous TV producer Glenn A. Larsen, because he likes to integrate it into TV programs such as Battlestar Galactica and knight. In fact, it is difficult to execute on hardware, which is due to its weak tail following the leading pixels as it bounces back and forth on the display screen. [Eric Gunnerson] decided to use fade, a custom framework for LED animation running on esp32, to make this and other animation effects easier to implement.

The LED animation is good, but what about the servo system? Can they be modified to support fade? Due to fade’s architecture and [Eric’s] existing support for non addressable LEDs through PWM signals, this is a fairly simple module. By adding a UDP connection, multiple esp32 can be placed under the control of the central microcontroller, and more than 16 PWM channels can even be supported on the esp32.
The following video shows [Eric]’s servo support demonstration with an eight channel electromechanical Larsen scanner. Each “pixel” is a painted table tennis ball swinging back and forth on a hobby servo. The whole thing sounds as bad as you think. If you squint properly, the effect looks convincing, but that’s not the point. The real story here is [Eric]’s thoughtful architecture, which makes mods easier than starting from scratch.