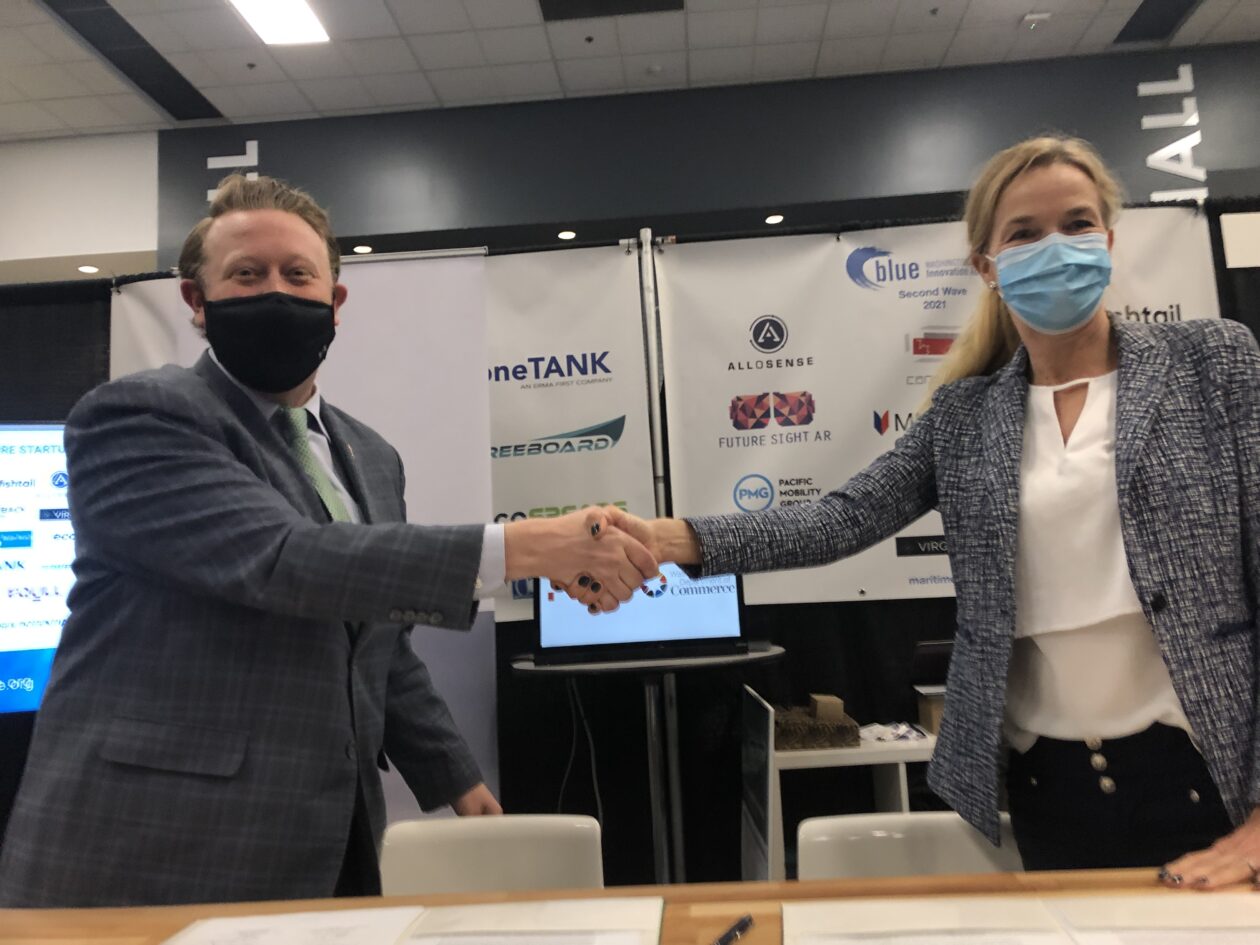 At the Pacific Ocean Expo in Seattle on Friday, representatives of the governments of Washington state and Norway updated their memorandum of understanding in a sea of colorful Waterproof Bibs, plush captain’s seats and ship parts.
The new biennial agreement will maintain the framework first established in 2019, under which Washington and Nordic counterparts will cooperate in private sector exchanges to increase environmentally sustainable business opportunities in the so-called marine technology blue economy and a green economy in areas such as energy decarbonization.
“This is a step forward in building cooperation bridges and open innovation systems to share and learn,” said Hege Barnes, director of the Americas of the Norwegian Department of international business development of the Norwegian government. “As part of the green transformation of our global investment, we are bringing together companies that will change the world.”
The agreement was reached after the signing of a new memorandum of understanding between Washington state and Finland earlier this month, after the ambassadors of Norway and Finland visited Seattle in September. Norway signed a memorandum of understanding with California focusing on electric vehicles in April, but the 2019 agreement with Washington is the first agreement between Norway and the state of the United States.
Chris green, assistant director of the office of economic development and competitiveness of the Department of Commerce in Washington, said: “in addition to technology, companies and cool innovation, I really believe that Norway and Washington share common values in environmental management.”. Green pointed out that Washington state and Norway have similar population and GDP.
Washington marine blue is a non-profit company responsible for the state’s growing maritime business focusing on sustainable development and sponsored the signing of the memorandum of understanding.
“This is a critical moment that requires knowledge sharing to grow, accelerate and expand,” said Joshua Bergen, President and CEO of Blue Marine.
Before the suspension of international exchanges of coronavirus diseases in 2009-19, two delegations from Washington state went to Norway and one Norwegian delegation came to Washington state. But these trips have resumed, and nine Finnish companies visited Amazon, Boeing, Microsoft, Seattle and Tacoma ports earlier this month. In January this year, companies in Washington are expected to travel to Norway to participate in norshipping, an important international shipping conference.
These exchanges have yielded results. Iocurrents, a Seattle based data analysis start-up, signed a contract with Kongsberg maritime, a leading Norwegian company, earlier this year. In 2018, Norwegian battery manufacturer Corvus energy opened an office in Seattle and expanded its business in the United States. Partly due to the formal business relationship between Norway and Washington state, Corvus plans to start producing batteries in the state by 2023, which will meet the growing demand for electric ferries in Changqing state.
Sveignung Odegard, vice president of North American sales of Corvus energy, told geekwire, “it creates a platform for us to communicate with each other, build networks and learn how to cooperate.”.
These potential success stories are at the heart of Norway’s global business ambitions, and Norway has found a willing partner 4500 miles away. “Norway is a small country, so we and our company need to learn how to scale up,” Barnes said. “How can we make our company think more and build partnerships to help them grow?”