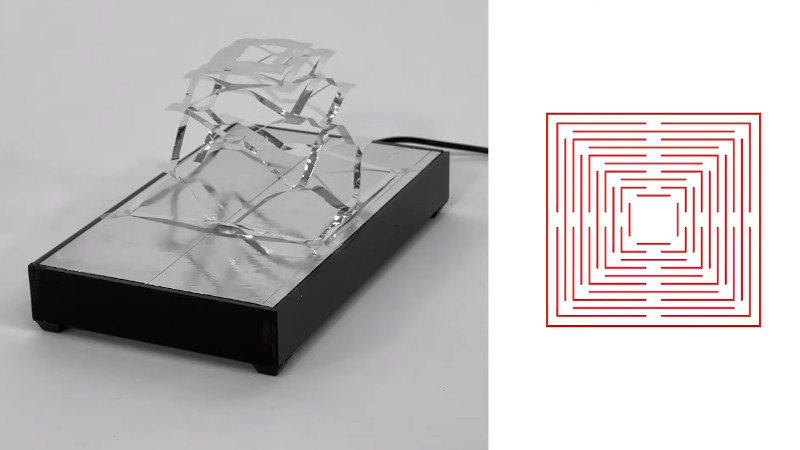 Mylar has many useful features, so it often appears, not only in DIY projects, but also in our daily life. But to this day, we have never seen a piece of polyester film jump up and try to attract our attention. But that’s the promise offered by electripop, a fascinating project of the future interface group at Carnegie Mellon University.
The core principle here is quite simple. When there is static electricity, a polyester film can rise vertically into the air. Cut the tape from the middle and the two sides will repel each other to form a “Y” shape. By extending this concept and placing the notch fully and carefully, it is possible to create surprisingly complex three-dimensional shapes that pop up once an electric charge is applied. A certain degree of motion can even be introduced by adjusting the input power. The post break video provides several examples of this principle: for example, a 3D flower that either stands upright or withers under the action of an external data source; Or an avatar that swings its arms wildly to get the user’s attention.
Since the relationship between nested cuts, slits and holes in Mylar plates and the final 3D shape is not particularly intuitive, the team developed a visualization tool that can be used in conjunction with existing vector art programs to create 2D cutting files. Once you are satisfied with the design, it will expand to the desired shape, which can be achieved quickly with a vinyl cutter or laser. The low entry threshold makes this project particularly suitable for DIY replication. We are eager to see how the maker community can put this concept into practice.

There are many ways to charge the new deformable polyester film display, but we particularly like the team’s Micro Arduino controlled Van de Graaff generator. It may represent the smallest and simplest implementation of this classic high voltage generator we have seen. It itself looks like an interesting small project.
Electripop was developed by [Cathy Mengying Fang], [jianzhe Gu] and [Ling Yao] in cooperation with [Chris Harrison], director of future interface group. Readers may recall that in 2018, we reported on vibrosight, another project of [Chris] and his students. Last year, the project finally expanded to demonstrate laser non-contact sensing on a city scale. Please pay more attention to this innovation in the near future.