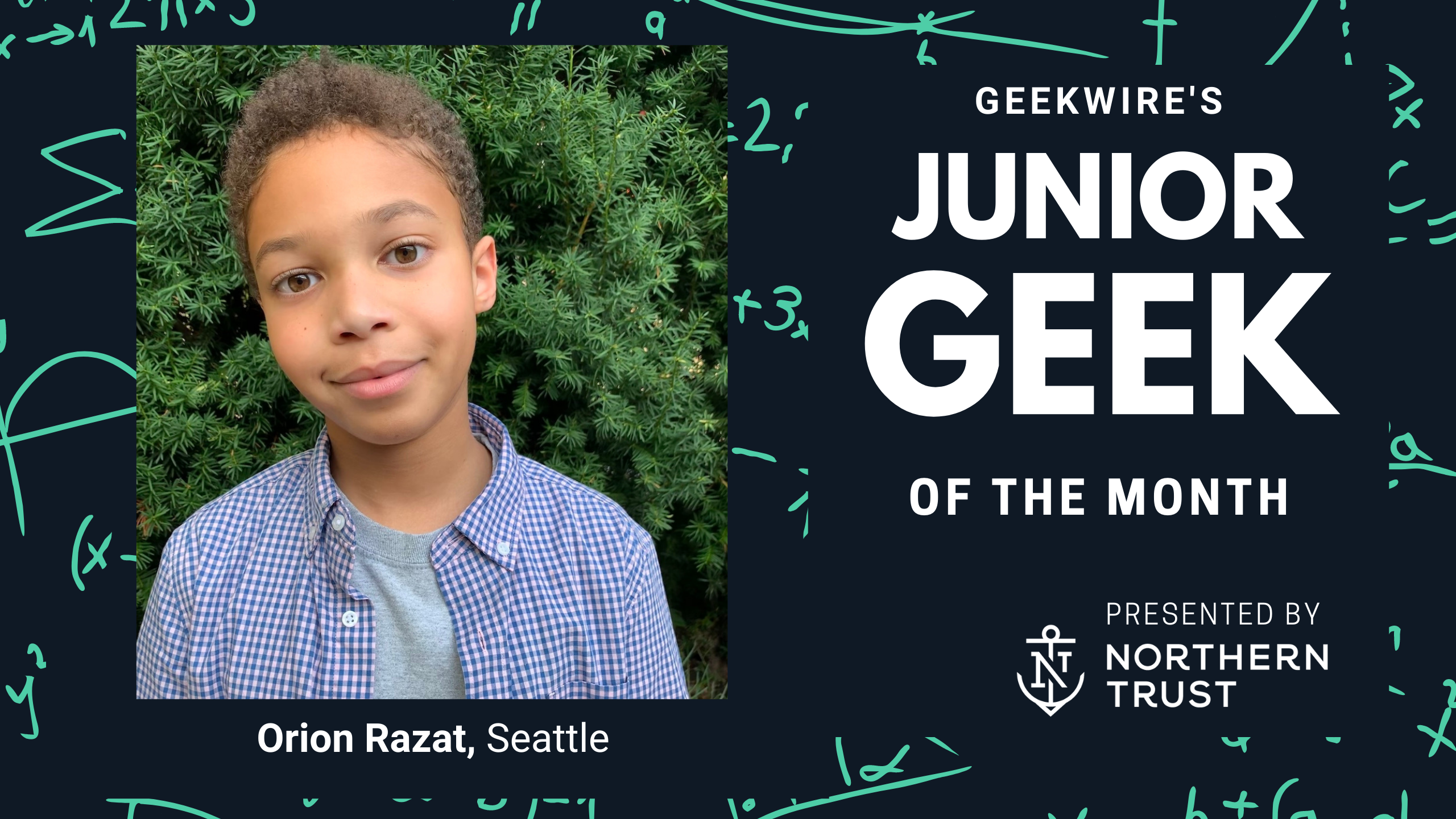 Orion Razat is a busy kid.

The 12-year-old is already an accomplished writer and is writing his second book. He is also an entrepreneur, animator, public speaker designer and dreamer.

Add this month’s juvenile geeks to the list, because seventh graders received this honor in August, awarded by the Northern Trust, in recognition of talented young scholars, innovators, creators and entrepreneurs in the Pacific Northwest .

As a joker in the classroom, he loves science, technology, engineering and mathematics, and was inspired by his teacher to combine the two.

“The teacher doesn’t quite like me telling jokes in class,” Orion said. “They understood that it was for good intentions, so they told me that maybe all my interesting and stupid ideas could be written in one book. Then they could be shared in a dedicated time in class.”

This idea turned into a published book called “101 STEM jokes” A mix of geek puns, interesting facts and children’s activities related to STEM.

“I didn’t fully foresee this,” Orion said of becoming a published author and selling his books on Amazon.

Orion’s mother, Imani Razat, said that her love of writing and drawing began when she was very young, when Orion had developed a knack for storytelling. She gave him a blank book from the art store, and he filled it with stories about his imaginary friends. He began to bring home-made books to school to share during “Carpet Time”. She said that when he was in kindergarten, he declared that he was a writer.

Orion’s parents encouraged him to stimulate his imagination and Share on YouTubeHe studied Adobe After Effects and founded a “production company” called Rocketshipsquid.Under the same handle Instagram, Orion has just launched a new T-shirt design that combines his love of chemistry and ice cream.

Orion’s journey as a writer has led him to various publications, including Parent Map, STEM Spark blog, Red Tricycle, and The Week Jr. His animation has been screened at the Seattle Museum and he is the winner of the 2020 University of Washington Neuroscience Prize in the Children’s Poetry Competition.

Four years ago, before his family moved to Seattle, Orion lived in New York City. His father Kaza Razat works in the field of artificial intelligence and is creating a health and wellness startup and chatbot. His mother studied communication at Johns Hopkins University.

Orion has a keen interest in transportation and urban planning. He likes to build in “Minecraft” and “Roblox”.

“This is a great way to kill time and create something, instead of blindly staring at a YouTube video and dancing with a handsome guy,” Orion said.

During homeschooling with his mother, he used the design program Sketch to make his own custom traffic maps, formed a community and imagined who could use the traffic and green space. As part of his curriculum, it is important to build a fair city.

Now he has read the second book.

“I don’t want to spoil it too much, but it’s like a science fiction novel,” he said, and then gave up knowing more about the project. “The basic premise is that this kid saw a sick whale in the news and tried to help it. Then he made a device that would allow him to communicate with the whale. The whole world is paying attention to him and the technology he created, and then the whale Finally speak for the ocean at the United Nations.”

Orion said that this book takes place in the future and will feature robots and high-speed trains. He hopes to collaborate with activists and marine biologists to promote the book and its environmental information.

His view of the planet is a mixture of excitement and reservation. He believes that in terms of technology, the future may be a real leap forward for mankind, but at the same time, 2020 is “crazy enough”, he said, the next 20 years may be even more crazy.

He still doesn’t know who he wants to be when he grows up, but he already knows how to help.

“I just want to have a lasting impact on how people perceive climate change and plastics in the ocean,” Orion said. “I think this book may raise some awareness and make some changes, I hope.”

GeekWire will present a new young geek of the month in the profile, aiming to capture how they have a positive impact on the world through their geek pursuits. In addition, they will also receive special recognition from our project partner Northern Trust.

You know an outstanding young geek from 12 to 20 years old. Will he change the world? Submit nominations.

Nominees must be residents of the Pacific Northwest, and nominees under the age of 18 must include parental information. Jr. Geeks can nominate himself, but be sure to include the contact information of your parent or guardian.

Read our previous young geek winners of the month.