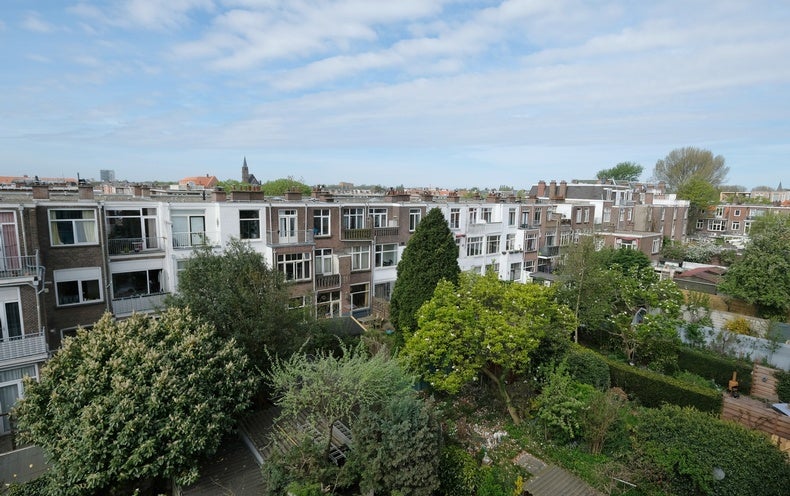 On a usually quiet residential road outside the Dutch city of The Hague, the seat of government, the whine of cranes and welding tools heralded a not-so-quiet housing revolution. Four workers stood on a scissor lift next to the apartment building and leaned a 40-foot-wide, one-story high, insulated facade against the existing wall. Its soft brown, gray and beige brickwork patterns and triple-glazed windows perfectly fit the existing framework and openings of the building.

The original windows and very old brick walls allow cold wind to enter the room, and warm indoor air escapes, wasting a lot of energy used to heat the building. The new facade is mainly fire-resistant expanded polystyrene-essentially hollow spheres that can trap air to form a thick insulating layer-facing hardened clay and carved into hundreds of so-called “bricks” “A very thin rectangle.

When I visited the suburbs on a rainy day in early summer, the surface of this new building prefabricated in the factory was one of a dozen such facades on the local building, and the measurement accuracy of each structure reached the millimeter level. The installation is part of a joint effort to transform an energy-inefficient public housing into an ultra-low-emission home without having to open the walls or transform the attic. The building is wrapped in a package equivalent to a winter jacket or a summer beer koozie, avoiding the need to insert insulating materials into dozens of walls, attics, and attics. The roof will also be equipped with similar prefabricated, lightweight, highly insulating materials and equipped with solar panels.

In developed economies such as the Netherlands and the United States, a large portion of greenhouse gas emissions can be attributed to energy losses in residential buildings. But retrofitting houses to improve efficiency and reduce carbon footprint is often still cumbersome and costly. Despite the long-term environmental and financial benefits, this work requires a lot of contractors and upfront financing, which is offensive to homeowners and landlords.

Ten years ago, the Dutch government began to provide seed funding for a non-profit program called Energiesprong or “Energy Leap” in Dutch to address this climate challenge. The initial investment helped engineers, construction companies, hardware suppliers, financiers, regulators, and landlords come together to find a way to mass-produce home renovations.

Landlords who plan to make routine renovations to their houses can now simply add energy retrofits to the process and adopt attractive new exterior walls and roofs. Automatic laser equipment can accurately measure the entire exterior of the building within a few hours. The information is uploaded wirelessly to large factories, where walls, windows, doors and solar roofs are mass-produced and assembled together for the target building. The completed exterior walls and roof are trucked to the site and connected. Normally, because solar panels sell excess electricity to the national grid, at least in summer, the annual energy cost of building owners or residents drops to zero.

In the Netherlands, the average renovation cost of a family home (usually a row house) is about 94,000 USD. This may sound high, but it is comparable to other conventional refurbishment costs that do not save energy. In a neighborhood in Utrecht, the energy demand of more than a dozen houses and about 250 independent apartments renovated in 2019 dropped from 225 kWh per square meter to an average of only 50 kWh per square meter. The remaining energy demand is met by solar energy.

These substantial energy savings have prompted owners to sign a renovation plan without any public funding (although solar subsidies are available). Other countries and communities are mimicking the Energiesprong method in new projects. Recently, the New York State Energy Research and Development Authority allocated $30 million to its own program called RetrofitNY.

The facades installed in The Hague were made by RC Panels, a supplier located two hours east of Lemelerveld. This for-profit company focuses on insulating more than 2 million row houses and more apartment houses in the country. Lianda Sjerps-Koomen, the company’s business development manager, took me through a factory floor the size of a hangar and pointed out that a team of workers brought together various layers of raw materials to make the exterior wall. A powerful vacuum crane shrouds the panels and guides them along the assembly line until a huge cutting machine cuts precisely-measured window and door openings from the huge expanded polystyrene panels and other layers.

“In order to achieve the energy transition, we need to renovate millions of houses,” Sjerps-Koomen said, because a nearby dual robotic arm operated by a camera presses six bricks into one of the facades horizontally across them every second. Sjerps-Koomen told me that this factory transforms hundreds of houses across the country every year, just like a factory mass-produces cars or kitchen counters—the house renovation industry is not accustomed to this method.

In another Dutch enterprise zero factory, engineers designed a single roof module, which is equipped with a hot water electric boiler, a heat pump for home heating, a smart meter and a solar connector. These devices are usually the main part of energy retrofits, but are usually done piecemeal by different contractors or industries, and often require customized, expensive installations. Just a few days after the zero factory received the order, the company’s installation team can use a crane to hoist a complete module to the top of the flat-roof or pitch-roof house, or to the side.

The company produces approximately 1,000 modules per year, and each installation costs approximately US$16,000. It claims that if several different suppliers work separately, the typical cost in the Netherlands might be $35,000. As more and more houses are renovated, the cost should drop. This change may allow more large landlords, such as local governments, to fund renovation work as part of their regular property maintenance.

“We are working hard to reduce the price of modern energy systems to a level that everyone can afford,” said Jasper van den Munckhof, one of the company’s co-founders. But he acknowledged that if the government’s 2050 emission targets are to be achieved, large-scale renovations will have to be greatly expanded. He explained that the Netherlands needs to “perform a thousand net-zero retrofits every day.” “Currently, we are running at 10 o’clock.”

According to British scholar Donal Brown (Donal Brown), mass production is crucial to the expansion of this emerging industry. He is the head of the sustainable design collective. Research on suitability for other markets. He described Energiesprong as a radical business model that requires transformation and innovation and the support of policy makers. For example, Brown said, Dutch electricity suppliers allow the electricity generated by the solar panels to be fed back to their grid system during the summer in exchange for homeowner credit. Without that kind of “feed” or “net metering” tariffs, these households would have to pay for any energy use in winter. In addition, he said, only large-scale transformations can be affordable. If you don’t roll out thousands of modules at a time, the cost will not be halved to what he thinks is necessary-less than about $50,000 per house.

In the United States, the progress of the renovation is even slower. Although some states offer incentives or rebates to homeowners who perform energy upgrades, this household-to-house approach, implemented by a range of different contractors and suppliers, has been slow and has little impact on residential emissions.

In New York State, the Energy Research Institute used part of its $30 million investment in RetrofitNY to launch a competition to select specific affordable housing for renovation. Companies are faced with the challenge of designing, constructing, and installing appropriate modifications, with the goal of tenant comfort, cost-effectiveness, style and energy performance.

Doreen Harris, chief executive of the Authority, stated that she hopes to be a “catalyst” for the broader investment needed to transform the current housing sector by demonstrating the techniques and methods of mass production. Her team recently allocated $1.8 million for a $20 million renovation project for nine buildings in Bushwick, Brooklyn, including 146 apartments. The non-profit owner of the complex estimates that once the final phase is completed later this year, the overhaul will reduce long-term energy use by 80% and reduce its annual cost by $180,000. If the project is successful, hanging polystyrene exterior walls on the sides of large apartment buildings may become more common.