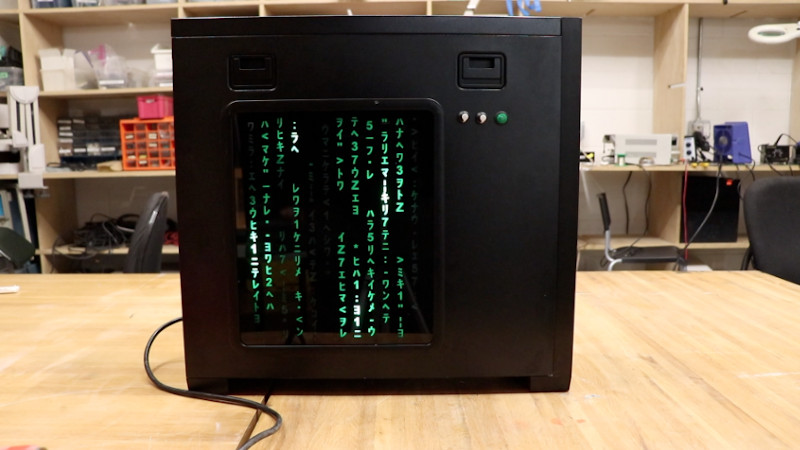 With the release of a new matrix film, it is not surprising that we are beginning to see more and more projects around the series’s iconic “digital rain” effect. In this virtual tsunami of green sushi recipes, several particularly unique examples surfaced, such as this very smooth RGB LED PC side panel made by [will Donaldson].
In his computer case, [will] installed a black acrylic board, which cut out all the “code” characters with a laser instead of an ordinary transparent window. Behind it is a row of ws2812b led strips embedded in vertically aligned channels to prevent light from flowing out horizontally. A piece of frosted plastic is sandwiched between the two, which helps to disperse the light and make a single LED less visible.

All LEDs are connected to nodemocu esp8266 through 74ahct125 level shifter, but [will] points out that you can certainly use different microcontrollers to make some adjustments to the code. At present, users use two potentiometers and a button installed next to the panel to select from various lighting modes. But if you think so, of course, you don’t need to spend too much time adjusting the firmware, so you can trigger the lighting effect from the PC.
Adherents will notice that this means that the character can’t actually change or move, but as you can see in the video below, it still looks very impressive when the LED moves behind them. If you want to recreate the appearance on a smaller scale, check out this Arduino library, which can be displayed on a TFT display in just a few lines of code.